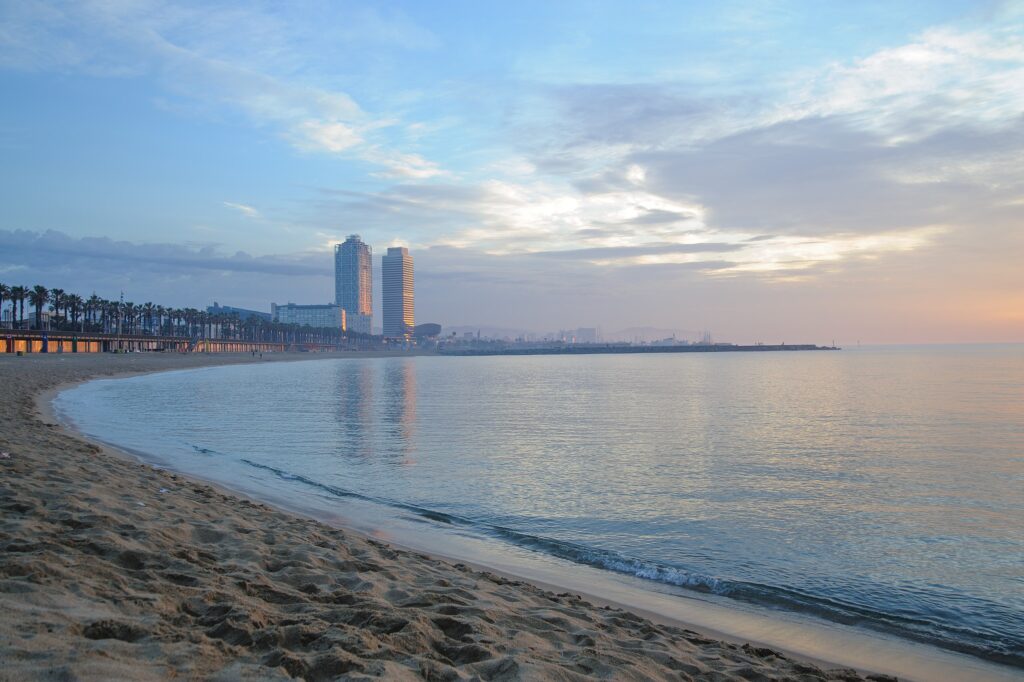 Beaches transect several districts of Barcelona which enables a passionate traveller to discover each neighbourhood the certain beach belongs to. After or even before having a bath one can have a walk around various «barrios» enjoying its cafes and shops. There is no need to say that beaches of Barcelona are surrounded by xiringuitos (small bars) and restaurants, though, there might appear an urge to crawl into and lose oneself in the city streets and feel the flow of the inner city. Tourists habitually wander around the most famous attractions, and we invite you to experience both classic and alternative ways of learning about our wonderful city of Barcelona with its lovely sea views and history-breathing neighbourhoods.

Let’s get started by naming the beaches reversely: from right to left, or, in other words, from West to East, taking the W hotel as a landmark point: everyone knows it and rushes to see the fascinating building as soon as one gets to Barcelona. In the shape of a sail, its own strong character along with subtle touches undoubtedly make the building stand out.

W overlooks Playa San Sebastian – the first beach we are going to talk about. It is one of the oldest and the most traditional beaches. It is also the longest one (around 1000 metres). There is the best swimming space – Club de Natació Atlético Barceloneta – nearby. The sports club has two outside pools, so don’t be surprised to see people swimming here and there

The metro station Barceloneta (L4 yellow line) is very close, just 7 mins walk from the beach. You won’t regret opting for Playa San Sebastian as your first experience of resting by the sea here.

Playa San Miguel is the next beach located between playas San Sebastian and Barceloneta. Its length is about 400 metres, and is situated by Plaza del Mar (Sea Square). There is an emblematic sculpture «Homenaje a Natación» by Alfredo Lanz («Tribute to swimming») in the Square close to the sports club. The sculpture was installed in 2004. «The main strength of this work resides in these forms that remind us of the dynamic lines that are drawn with the movement under water and that serve, in parallel, to support the figurative elements, human silhouettes practising four sports (speed and synchronised swimming, jump and water polo) and that explicitly define the meaning of work» (Elias Rovielo, flickr).
Sea Square (Plaza del Mar) attracts skaters and buskers, and children love running and playing hide-n-seek below the sculpture.

San Miguel beach is equipped with all the essential facilities: showers, toilets, public phones, watch tower, a car park and a boardwalk that provides step-free accessibility to the beach. One can easily reach San Miguel playa by taking public transport. There is an eco flag on the beach which demonstrates the quality of services the place offers to its visitors.

Another fascinating creation located in San Miguel Beach is «The wounded star» (La estrella herida) – a 10-metre high sculpture by the visual and multidisciplinary German artist Rebecca Horn. The piece was erected in honour of Barceloneta’s history and development in 1992 during the preparation for the Summer Olympic Games.
In continuation we would like to tell you about Playa Barceloneta (around 500 metres long). Being fully equipped as the aforementioned beaches it has both volleyball and basketball courts, a play area for children, a ping pong table and a marvellous free of charge gym in the open air called The Nike Training Outdoor Project. You will easily spot it walking along Paseo Marítimo. This is actually where Barceloneta beach starts – around Marítim promenade. Many people oftentimes confuse Barceloneta with Playas San Miguel and San Sebastian assuming that Barceloneta beach occupies the whole coast line from the port to the end of Paseo Marítimo.

Welcome to our sailboat. Sit, relax and enjoy the incredible perspective of Barcelona from the sea.

The most important for us is to share good feelings with people: you are on vacation, and we want to convert this day into amazing memories that you will keep from Barcelona.

Contact
Legal
This site is registered on wpml.org as a development site.