Barcelona from the sea

Discover beautiful places inside the city, most of them you can see from the sea. 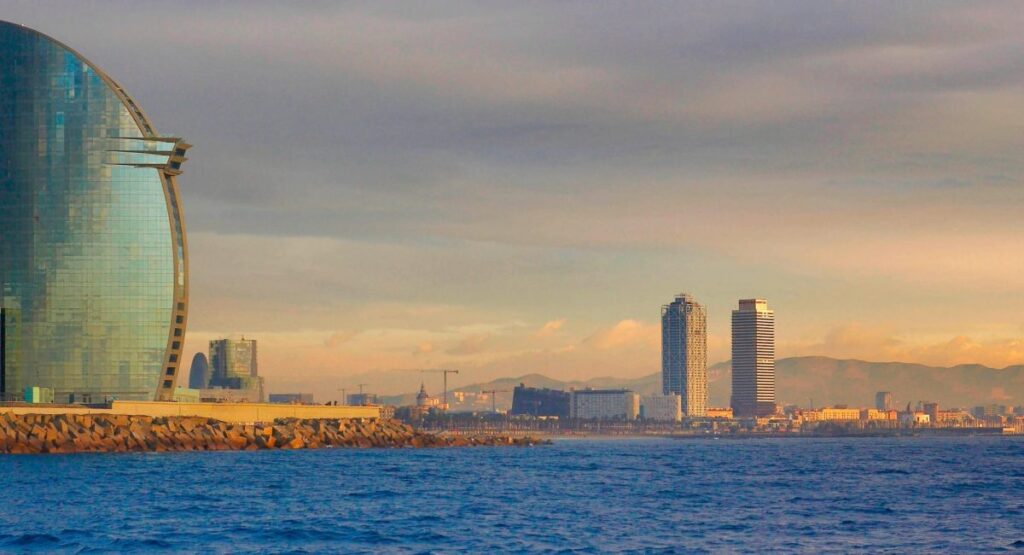 We would like to start our first blog by presenting our «second home» – it’s literally a place where we spend all of our time, especially on spring and summer days. It is called Port Olympic. Each of your travel stories begins here. And if you look around, there’s no doubt the first thing you notice will be a composition of two tall towers which are impossible not to pay attention to and not to admire: the Torre Mapfre and the Hotel Arts. Mapfre is an insurance company, and the Hotel Arts is a luxury 5 star hotel owned by the Ritz Carlton group. But we are not going to talk about the twin towers today, the main character of this blog is Marina Street which lies between the two aforementioned buildings and embraces them with its fresh air and marine spirit. We invite you to explore Marina Street with us and discover a couple of tips and facts you might not know and will be really interested in learning.

«Marina Street cross Barcelona from the sea to the mountains»

First of all, there is no need to translate the name of the street, it’s quite clear that the meaning is «sea» or «marine». It appears to be an adjective in this context. Marina also sounds like an international name derived from the word «mar» (sea). We are pretty sure there are Marinas reading our blog at the moment and we are happy to greet you, girls! By the way, the name Mar is femenine and it’s quite overused in Spain as well. Despite having a masculine origin, «el mar», it is mostly ladies who possess this beautiful name filled with freedom vibes.

Marina Street is extremely long, extending up to Carrer de Taxdirt and before converting into Carrer de l’Alcalde de Móstoles. It becomes narrower after the junction with Valencia Street. But before that it’s quite wide and even has cycle lanes starting from the Port Olympic. So you can have a bike ride if you are a sports lover, which will ease your trip and help you to see more on your way. Marina street has much to offer: there are such sights as La Monumental and the Sagrada Familia.

La Monumental is a bullfighting museum now. It was built in 1914 and was the last active bullring until 2011. The building itself is a piece of art, so don’t forget your camera if you happen to be wandering around there. And the second wonder is the Basílica de la Sagrada Familia (the Sacred Family), the genius unfinished creation of the architect Antoni Gaudí. The Sagrada Familia is also a part of a UNESCO World Heritage Site. You can’t afford to miss out on this jewel if you are in Barcelona, even for just one day.
When you feel a bit tired during the trip, take your time and have a quick rest in one of the numerous cosy cafes along Marina Street. Sit on the terrace and enjoy the sunrays, reminding you of the beauty of the moment, and introspect on how happy you are chilling in the centre of a marvellous city of Barcelona. You can also find multiple local designer shops in Marina Street or the lanes around it.

Marina Street intersects the essential avenues which basically form Barcelona: La Avinguda Diagonal, La Meridiana and La Gran Via Les Corts Catalanes. The metro station Marina isn’t actually situated on the street. If you look at the map you can clearly see it, but it’s still nearby and invites you to visit the small park next to the Barcelona Nord bus station or the Ciutadella Park – the most famous and fascinating park of the city.
The metro station Marina is on the red line (L1) of the underground and it’s just three stations from the centre – Catalunya Square or 10 minutes walk from another outstanding tower – the Torre Glóries, or as formerly known, the Torre Agbar, a 38-story skyscraper.

We have to rush now and leave you here, around the Metro station Marina. It’s up to you where to head next: you can turn to the right and walk around the Glóries neighbourhood or turn to the left and explore the Ciutadella Park and El Born. We will personally go home by taking Marina Street up to the Travessera de Grácia. Enjoy your trip and let us know how it went! Have a fantastic adventure with plenty of discoveries!

Welcome to our sailboat. Sit, relax and enjoy the incredible perspective of Barcelona from the sea.

The most important for us is to share good feelings with people: you are on vacation, and we want to convert this day into amazing memories that you will keep from Barcelona.

Contact
Legal
This site is registered on wpml.org as a development site.